Biographical display
John Parker began his career in pottery aged 19. He learnt his skills through evening classes with Margaret Milne, helping build a kiln and joining potters' cooperatives. He joined the World Crafts Council in 1969, studied at Elam School of Fine Arts, Auckland University, and then travelled to England to study at the Royal College of Art in London. The College offered training in pottery based more on the European or Bauhaus philosophy of "form follows function". Here, John gained a Master of Fine Arts. He taught in the United Kingdom for a year before returning to New Zealand to take up the post as Director of the Auckland Studio Potters Centre.

John has been involved as a juror on major ceramic exhibitions throughout New Zealand. Through this work, and his international connections, John has helped form the direction ceramics have taken within the country.

John's work has been exhibited around the world and is held in many collections. He now exhibits in close to three solo exhibitions within New Zealand annually, and in many local and international group shows. View full list

At the same time as John was developing his interest in ceramics, John also became interested in theatre design, undertaking design briefs for theatre and musicals. Credits are numerous. He has a long history of designing for the Auckland Theatre Company. Plays range from Hooters, Trumpets and Raspberries at Theatre Corporate, Auckland (1985) to Cat on a Hot Tin Roof, Downstage Theatre Wellington (2000) to The Wife Shoe Spoke Japanese in her Sleep, Auckland Theatre Company (2009).

"I have been toying with the idea of embarking on a PhD, probably through the Australian National University in Canberra," he said."I'm going to put it in the bank and only spend it on my education."
John Parker - quoted to Linda Herrick, NZ Herald, published 3 November 2010.

John Parker is an artist of formidable skill, a master designer of exquisite objects of great beauty and as such, he occupies a singular place of distinction in the world of craft/object art. From the outset, his extraordinary commitment to modern expressionism marked him out as the maverick that he is, his stance seeming like heresy as it flew in the face of New Zealander's then adherence to the more accepted anglo-oriental principles of that time. His continued dedication to the exploration of the possibilities of pure form (form as a means of engaging with function), is a position that has seen him both lead and influence developments in NZ ceramics throughout his career. His work is the very best of contemporary informed by classicism, presenting an elegant refinement of geometric form, combining precise technique with intellectual discipline and reinforced with a play on the treatment of surface. 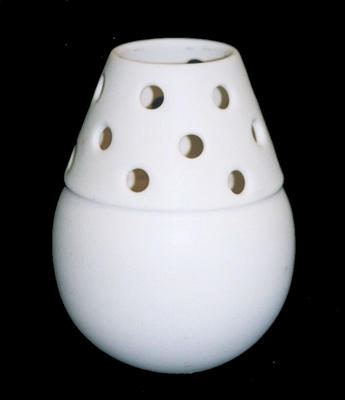